Coinbase released its S-1 report on Thursday ahead of its upcoming IPO. The report revealed many interesting data points, but I want to touch on one thing in particular.

Take a look at the red line in the chart below. This line represents the percent of Coinbase volume that is made up of retail investors, ie, people like you and me. 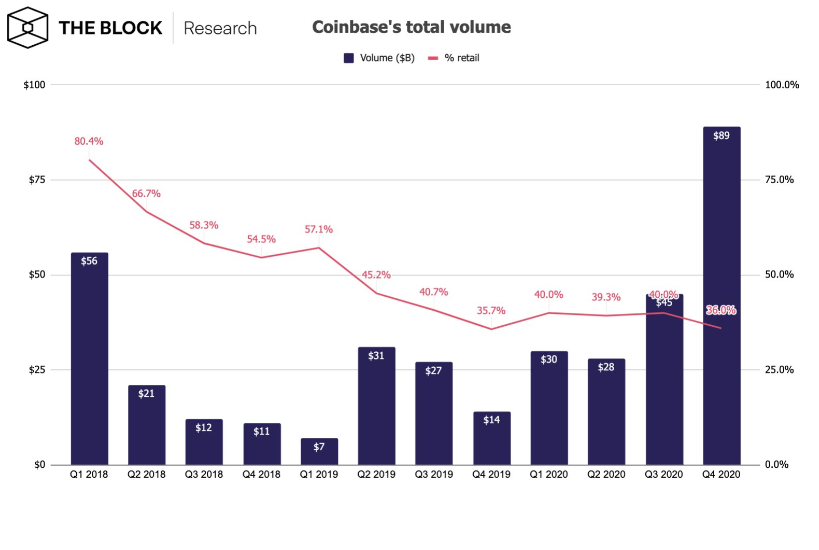 While many of us following the space have heard that institutions have driven this recent price run instead of retail, the chart from Coinbase makes it clear. While retail speculators were 80% of volume in the previous run-up to $20k in 2017, retail was only 36% of this most recent run to $50k.

Institutional investors are not like retail. They don’t get scared off after a short downturn and sell at a quick loss. They are less emotional. The institutions buying BTC are doing so with a much longer-term investment timeframe. The transfer of BTC from weak-hand 2017 retail investors to institutions in 2020 means that floor of the Bitcoin price is rising since institutions are less likely to sell.

At the same time – only the first 5% of Wall Street is invested in Bitcoin thus far. Only one S&P500 company has Bitcoin on its balance sheet (Tesla). Wall Street’s foray into Bitcoin has barely started.

The institutions that have invested so far are the front-runners, the early adopters of their kind. Many more are sure to follow.

For other interesting numbers from the Coinbase S-1 filing, check out this Twitter thread: https://twitter.com/lawmaster/status/1364918649425973249

View all posts by smcover